Category: sports | Version: 1.3.1
Developer: Quadriq Apps | Size: 8.36MB | Updated:08-4
Description
The most attractive, useful, intuitive and simple app for Summer Games 2016 in Brazil, Rio 2016 Olympics. It is a great app to follow Olympic events and competitions. Create a list of favorites and have a comfortable overview of them. Find previous standings in the medal-table view for past Olympics.
+ calendar, schedule
+ competitions
+ all sports and disciplines
+ Past Olympics results
+ star favorites
+ news
The 2016 Summer Olympics (Portuguese: Jogos Olímpicos de Verão de 2016), officially known as the Games of the XXXI Olympiad, and commonly known as Rio 2016 Summer Olympics, is a major international multi-sport event in the tradition of the Olympic Games due to take place in Rio de Janeiro, Brazil, from 5 to 21 August 2016. More than 10,500 athletes from 206 National Olympic Committees (NOCs), including first time entrants Kosovo and South Sudan, are scheduled to take part. With 306 sets of medals, the games will feature 28 Olympic sports - including rugby sevens and golf, which were added by the International Olympic Committee in 2009. These sporting events will take place at 33 venues in the host city and at 5 venues in the cities of São Paulo, Belo Horizonte, Salvador, Brasília, and Manaus.
Stay in touch with all events and results with this app!
Please note, this is NOT the official Rio 2016 app! 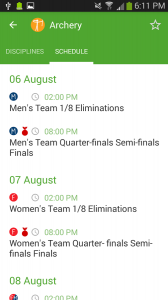 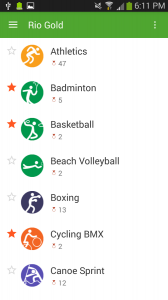 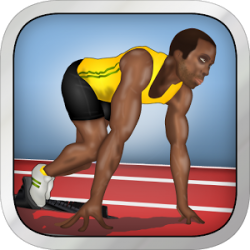